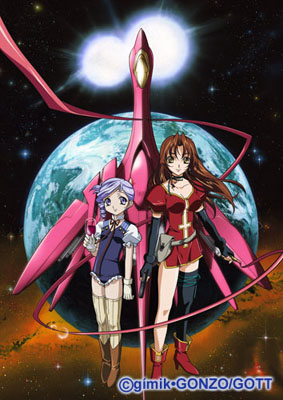 Plot Summary: In the distant future, humans have rapidly spread across the galaxy, creating thousands of independent planetary states. However, as humans begin to colonise more and more star systems, the scale of the skirmishes between planets escalates. The Intergalactic Planetary Federation (IPF) was established to maintain peace and stability, to promote economic prosperity, and to head off the threat of large-scale war. An era of peace prevails, but as each star system begins to prosper, so do the economic markets, which become the new battlegrounds. To oversee fair trade among the aggressively competing planetary states the IPF establishes the Galactic Organization of Trade and Tariffs (GOTT).The female GOTT receptionists Eclair — a beautiful and powerful fighter — and Lumiere — an ingenious information manipulator — work under cover, and are actually special agents of the secret Encounter of Shadow-work(ES), resolving important economic disputes between planets and organizations assigned to them by their boss Eclipse. Travelling in a high-speed space cruiser, La Muse and the ship's AI Wirbelwind, together withDonnerschlag, their guardian robot, these agents rid the galaxy of crime... though what is GOTT's real agenda?